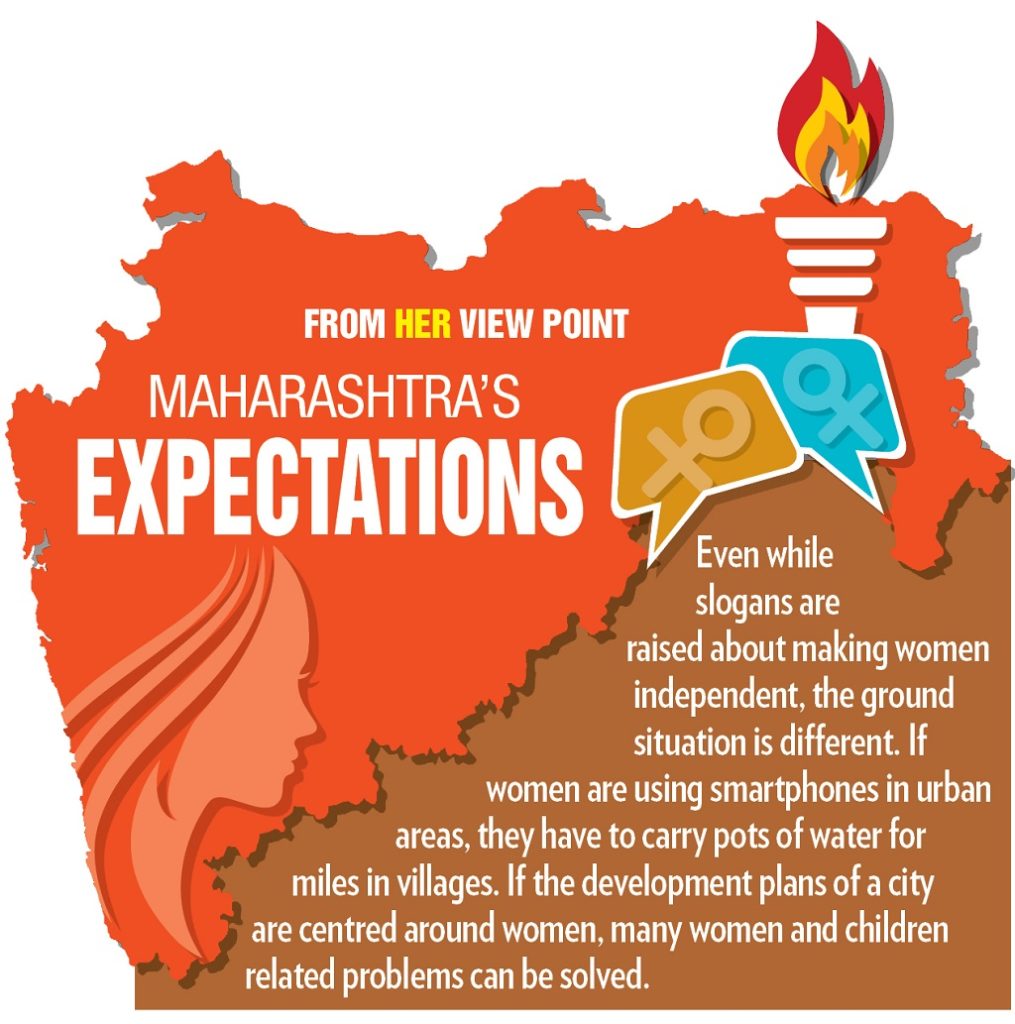 It is a tragedy that even after 60 years of Independence, women have to fight for respect, cleanliness and honour. Even though a lot has been achieved, there are miles to go for women and social workers working for the cause of women. If the development plans of cities are centred around women, a lot of problems surrounding women and children will be solved.

Though there is equality in education and employment opportunities, an imbalance remains in the urban and rural sectors. While women in cities are equipped with smartphones and travel by trains and buses, women and girls from the rural areas continue to walk for miles with pots on their heads to bring water for daily use. Though numerous schemes for education have been launched by the State and Central governments, there are no means to spread awareness about these schemes in several districts of Konkan, Vidarbha and Marathwada. Due to this, girl students education is disrupted after a certain age.

Even though the government is providing free education, the percentage of girls getting educated is less. The reasons for this are the secondary status given to girls and the ignorance towards the unorganised sectors. The security of women is as important as education. She has to remain at home for security. But, what about the violence she faces within the four walls of the house. The State government has made the domestic violence law for women, but many women do not highlight the violence faced at home. To stop this violence, there is a need for family counsellors at the police stations at district and taluka levels. Despite having an anti-dowry law, cases of women being burnt for dowry are evident. It is unfortunate that there is a lack of security officials for women at police stations despite having a provision for the same by law. waiting for help.

It is also necessary to provide counsellors for the social wellbeing and security of the victims. The government must take a strong stand on the matter. The number of criminals freed from rape cases is on the rise. In such cases, it is again the responsibility of the government to provide security to the victims and their families.

The problem of women employment is trying to be solved through small saving groups. Instead of imparting the same traditional skills to women, there is a need to impart newer skills like computers and technology.

The government has taken a commendable step regarding surrogacy and maternity leave, which is an important aspect in women employment.

There is a need to abolish Jat Panchayat and the draft for the same must be converted into a law. Malnutrition among women is as important as malnutrition among children and needs to be given cognisance. Even homemakers must be given the status of working women.

The condition of several women and children probation houses is very bad. State Women’s Commission, Child Rights Commission and juvenile homes do not even have basic amenities. There is a need to look towards these with sensitivity and improve the conditions of these houses. The stand taken by the government regarding entry of women into temples and dargahs is commendable and it must be implemented properly.

Break barriers of discrimination, let women be respected
Varsha Deshpande, social activist
Why are women and child development being handled by the same department? While a child belongs to both man and woman, why are women and children being looked after by the same government department? A child is not the responsibility of a woman alone, and hence there should be a separate department to handle child development. The laws and regulations related to women should be implemented properly. 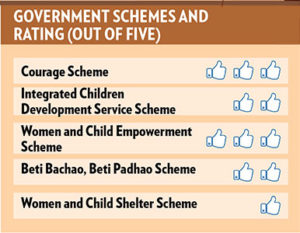 The condition of sugar cane workers in Beed district is poor. Almost 2.5 lakh workers working in Beed are from west Maharashtra.

The women, who work in the fields to harvest sugar cane crops, are looked upon as labourers, but the daily wages are handed over to their husbands. On one hand, most of these women labourers work for long hours, besides looking after their wards and family responsibilities, while on the other, there is no recorded evidence of them being field labourers. These women lead lives tougher than those of slaves. Along with the Women and Child Development Department, the Directorate of Sugar and Heath Department must also pitch into the matter.

Similar to the issues of women migrating from Marathwada, the issues of those living in the villages without their labourer parents are also of serious concern. The situation is worse when it come to teenage girls. Around 30 per cent of such girls are forced into marriage before the age of 18. Even after implementation of progressive national programmes like ‘Beti Bachao Beti Padhao’, girls are deprived of education and are married off. In Vidarbha, thousands of farmers are committing suicides. The farmers say that two-thirds of the field work is done by women. And after the death of a farmer, the whole responsibility of looking after children, parents, other family members, earning are borne by the woman. Though the government has taken a few steps to stop the farmers from taking such drastic steps, no concrete steps are taken for the well-being of the widow and her family. There is a need to chalk out a policy in this regard.

Another ignored area is the injustice done to women in the name of ‘Jat Panchayat’. She is deprived of her basic rights as well. This has to come to an end with the amendment in policies and laws.

Take care of women’s health
A large number of women in the country are suffering from anaemia. A woman’s health is considered only when she is giving birth or looking after children. It is important we understand that women are human beings too and a nutritious diet is their right. The maternal mortality rate in the country is still high and the babies too are found to be very weak at the time of birth. 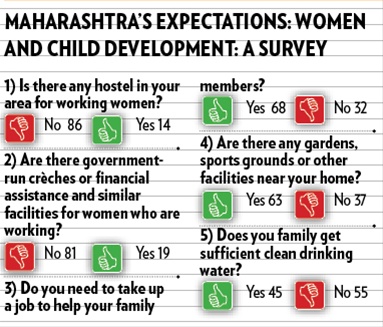 Western Maharashtra is known to be prosperous and progressive, yet the maximum cases of violence against women are reported from this region. There are laws for protection of women and children from domestic violence, yet the number of women who quit marriage is increasing. Even the number of suicides due to domestic violence is more in Western Maharashtra.
Since the new government has come to power, the fight for rights of the domestic help has remained incomplete. Not only this, field laborers, women working in brick furnaces, those having disabilities among others are miles away from even being recognized.
It is worth noting that today 50 per cent of the reserved category posts in gram panchayat and Zilla Parishad are mostly held by women. But many of them are just puppets and the decision-making is done by their husbands. This practice needs immediate attention. In future, these women will fight back. There will be a day when they will be economically and educationally capable. No fear of rape, violence, molestation, eve-teasing can stop her from fighting for her rights.
Efficient, hard-working men and equally capable women can together lead to a progressive Maharashtra.

Suggestions
Separate development department for women and for children needed Concrete decision needed on widows of farmers who commit suicide Protection of women from injustice in the name of ‘Jat Panchayat’ Nutrition, health and hygiene of women should be given priority